This just in from the Moonbat State:

Rocket launch will prove Earth is flat, California man says. This guy, codenamed “Rocket Man,” no relation to Kim Flung Poo of North Korea, has done this before with nixed results.

“If you’re not scared to death, you’re an idiot. It’s scary as hell, but none of us are getting out of this world alive.” Well some of us are Mr Hughes. You are now the poster boy for the Darwin Award. I can’t make this stuff up. Move over Governor Gerry Brown. You now have competition as the lead Moonbat of the Moonbat State.

Ooooo. Iran sends warships to the Gulf of Mexico. US is shaking in its boots.

US responds with this:

Iran is soon to be known as the Middle East’s Moonbat Nation.

Kim Flung Poo, no worse to the wise, gives Iran some advice. “If you’re going to come to the partay, then you better come prepared.” 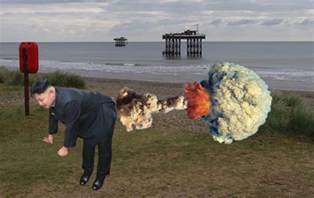 “So you think Trump is a “Hard Ass” do ya? Take that. Ayatolla. Just stay upwind as this is a killer fart.”  Kim banned from visiting California, The Anti-Flatulence State.

Thank you lord for the gift that just keeps on giving.

On another note: is that Mike Myer’s dad in that photo? Hmmm? Wondering!

There is a God:

Whoa, I though PRIDE was over last June. Another pic for the swim suit competition. This will be hard a hard one to judge one of the Judges was heard to remark.

Canada’s allies are killing their ISIS citizens. What is Canada doing? Killing then with love. As reported in yesterday’s post if we throw enough money at them – $10.6M per ISIS per – we can make them into a “hosers” just like the rest of us. Failing that, in typical Canadian bureaucratic speak….the government has launched the new Canada Centre for Community Engagement and Prevention of Violence to help jihadists “let go of that terrorist ideology,” The CCCEP for short. Hey, isn’t that the name of the middle school system in Quebec?

Happy Thanksgiving to the US of A.