Interesting read about Patrick Brown, the Ontario Conservative Party Leader, who resigned amid allegations of sexual misconduct. Appears he did something bad a number of years ago when he was single and available. Allegationists have come out now with their allegations. Why now? Why not a year ago? 10 years ago. In this new caustic environment it’s okay to destroy someone, normally a male, without a shred of evidence. Why? Because it was a female complainant. No other reason. It must be true. I’m waiting for the first male to spout off  a sexual allegation against a female. See where that takes ya. And bully to our Prime Minister who supports the sexual vigilantism in all of its nastiness. Of course he is a feminist isn’t he.

My two words of advice to all the males out there:

A “Cougar” is defined as an older woman attracted to younger men. On the prowl sort of whereas an Alligator (my definition): 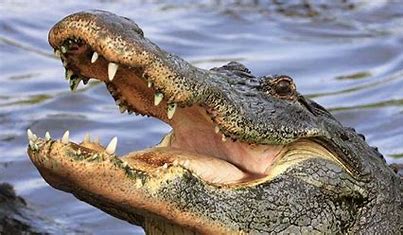 is any woman out there ready to devour or destroy the reputation, livelihood and well being of any male it has her sights on – without due course, due diligence, due evidence, or due process. Just due allegations! It’s just a “let’s dues this” and eat him up for breakfast. We’re due they, the radical feminists, were due to say. Let’s go after that due’d and eat him up.

See how the Alligator laughs in that photo. She knows!

But beware all of you radical feminists out there. Chivalry is dead now. You have just put the last nail into the “gentlemanly coffin.”  I mean I’m an old fart, a grumpy old man, well past his best before date but if I was younger I would definitely do things differently in today’s toxic atmosphere. No more holding the door open, paying for dinner, compliments, drinks or whatever. I would belch, fart, grunt, swear, and scratch my ass – wiggle me nuts – tell dirty jokes, well perhaps not, and – y’know all of those things that define a male – in front of you.  And, I would think twice about working with a woman because you just never know. It could be next week, next month, a year from now, maybe 10 years from now, as is Brown’s case, and wham – a sexual innuendo allegation from an “Alligator” comes your way. No defence, no evidence, just hearsay and buddy you are screwed. Nuff said.

On the “Trudeau Strong and Free” front

Another of Trudeau’s mandate tracking letters:

“The Government of Canada has reached agreements with all provinces and territories on collective priorities and 10-year funding to strengthen health care. In August 2017, federal, provincial and territorial (W – T – F) governments reached agreement on a Common Statement of Principles on Shared Health Priorities, which outlines key priorities for federal investments to improve access to mental health and addictions services, as well as home and community care and a joint commitment to advance health innovation and prescription drugs.”

What does that mean? No idea! Transparency again. So transparent that we can all see through it. All I know is that this mandate has been actioned as “completed.” Well, the home support care my wife received before she passed was awful, and my son had to wait 10 months for essential varicose vein surgery on one leg while being told there would be an equally long wait for surgery on his other leg. The Doctors from Lego were not amused. They just nodded their legs…er heads in agreement. Yes, completed my ass…no leg you idiot!

Poor Melania Trump. Doesn’t matter what she does or says she is vilified by those people who are just do damn tolerant and compassionate – don’t you know. Like these two:

Oprah for President? Are you kidding me? Okay, all you radical feminists out there. Where’s the outcry here? And don’t say Oprah didn’t know. You wouldn’t give the same courtesy to Melania Trump.

An additional $2.5M will be required to keep this “beacon of fun” going until 28 Feb.

Oh you mean the rink that fun forgot. No racing, no holding hands, no shinney, no hockey, no eating, no drinking, no skating, no music or dancing, no figure skating! No horseplay, nada. Oh, and you have to wait 3 hours to get through security. Unfortunately metal blades, as in skate blades, like box cutters, are forbidden and will be confiscated. Meanwhile just a couple of blocks away:

Our government at work. The right hand not having a clue what the left are doing. And I can tell you the left are up to no good.

Tune of the day:

The songs of Badfinger are indeed timeless. Check out this mostly unknown band from the 70s.

Have a great freakin Friday and a great weekend. Back Monday.