How’s the games going today? Or was it yesterday? Or maybe it was tomorrow? Gawd I hate these time zones. Thank you Sandford Fleming. Was he one of Sandford and Son’s sons?

So what time is it Gladys in PyeongChang?

Woman’s hockey final was very exciting. But I hate to see a team win or lose in a shootout. Too much like that beautiful game they call football:

And they won for heaven sakes. In a shootout. Only 15 killed! After 94 minutes of play the final score was, you guessed it, 0-0.

Woman’s hockey final game ended in a 2-2 draw. One overtime period then the shootout. US won but I have to say they outplayed Canada, especially in the 3rd and overtime periods. Great game gals. Very entertaining. No fights at all.

CBC’s sports reporter Colleen then asked the Captain of the winning US team:

“So, how does it feel to lose the gold to the US after having beat them for the last 4 Olympic games – 16 years? Is this the end of woman’s hockey in Canada?”

The team captain burst into tears after that question

“Back to you Scott” Colleen said.

“Thanks Colleen, great job, as usual.”

Didn’t see too much after that. Germany beat the Swedes in men’s hockey to advance to the semi finals. Canada will play Germany while Russia and the Cheques will play off. And what is it with this Olympic Athletes from Russia non sense. This could only come from the IOC! They received advice on this from the Canadian government officials….Geesh.

Scott Moir pissed at Woman’s hockey final and yelling at the refs.

“No, I am not a drunk, I do not have a drinking problem. I am not an alcoholic. I am a Canadian.”

Yeah that says it all. When asked who was / are his role models he remarked:

These guys of course: 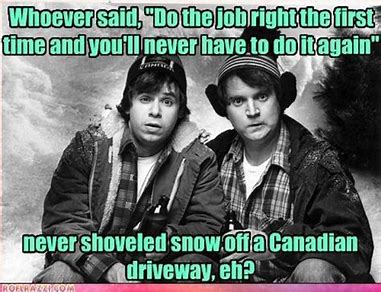 Song for the day: Let’s hear it for the US Woman’s Hockey Team: