Patrick Brown, the leader of the Ontario Conservative Party opts not to run for the leadership of the party after being ousted by the Alligators of Ontario and his party itself.

See, even this gal is having a good laugh at the Brown incident.

Yes, the Alligator’s allegations of sexual impropriety that have turned out to be nebulous at best and rotten to the core at the worst. But, like all good conservatives, the damage was done and poor old Brown didn’t have a hope in hell of regaining the leadership of the party. A real modern day “Coo – day – tits er tat” I would say. I feel sorry for him and the Conservatives are going to wear this big time. Mark my words, the Cons will lose in June. But then again they are winners in a sense because they, the party, always elect a loser to lead their party. Brown, although I do feel sorry for him, fell in with his loser predecessors Hudak (who) and Tory – the man, not the party. And of course the Sheer nonsense at the Federal level. Me, I don’t really care as they’re all bad. Just look at this guy, our current Prime Minister:

“How I love being me. Today, I think I’ll be a feminist. Tomorrow? A Sikh. Day after? Oh, I don’t know, how about the leader of Canada? That should be fun.”

Then again he replaced this guy:

“Howdy Pardner. I’m the Prime Minister of Canada and you’re not.”

But now we have this wo-people as a potential leader of one:

Hey, I’m just a “Cowgirl in the Tar Sands”

Then there’s this guy: 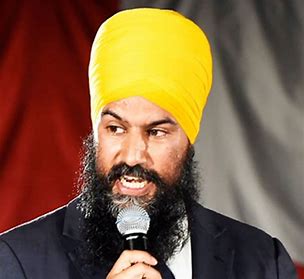 Scary. Nothing New about this New Democrat.          I want to destroy Canada and take us all back to the dark ages. An age where everyone had to wear bright head gear like this so as not to bump into one another.

And on and on it goes.

I’m going to vote for the new “EPC – Elephant Party of Canada.” They advocate for all of those people out there suffering from Sleep Apnea. People who are forced to go to bed like this:

How romantic. They get no respect, and nothing else either! But she has flowers in her hair.

That’s my political rant for today.