Who would you rather be?

A driver in life:

You thought RF pollution was bad now, wait for this:

And after a few years of exposure to this RF?

Its a killer people or wo-people.  I don’t know about you but I love driving.

Driverless cars?……..Geesh. Just look at it:

Are you kidding me?

And speaking of snowflakes. Love this quote:

“Growing up there is one important lesson worth noting. A child will learn half of what he or she is required to know about life from his teachers and family. The other half he or she will learn from bullies.” It is true. All of the rhetoric, the programs and all of the pink shirt days out there do absolutely nothing to address or stop a bully. This does:

Bullies are cowards. Fight back. As far as cyber bullying goes? Just turn the damn thing off. Simple. Don’t be a snowflake!

And, if you don’t think bullying is alive and well in the real adult world all one has to do is look at Hollywood, late night talk shows, ANTIFA, BLM, Universities, or any of the other tolerant leftist rants about Conservatives, Pro Lifers, Christians, Marriage, values and on and on it goes. And how did these do gooders get their bullying credentials? In school!

From the: “They don’t give a rat’s ass about deficits or debt so why should I” file comes this: Notley Triples Alberta’s Deficit

The Trudeau Liberals are resisting criticism of this foolhardy mission from both left and right. Canadian soldiers will be Mali-bound come summertime. And just so the world know this will be a gender driven mission where over half of the Peacekeepers will be female. That should go over well in this “Shit-Hole” of a country where 99% of the population is Muslim!

Whoa………………….Let’s see how Trudeau squirms out of this one when the shyte hits the fan:

Today I am a Muslim.

Tomorrow I will be a Sikh

A few weeks ago I was an Indian Princess….er Prince: 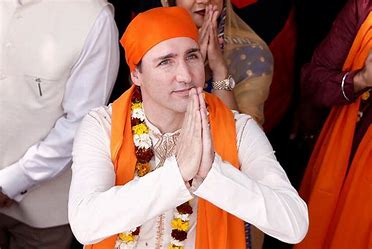 Dear Shiva, god of wardrobe. I really want to be an Indian. Whoosh. Okay here you are then:

Or how about being an anarchist:

Or, or, or maybe Superman:

Oh, how I love being me. Let’s see. Maybe tomorrow I can be the Prime Minister of Canada. Hmmm, maybe not. Sooo boring.