Hey, check out my first novel published on Amazon. “Kurofune: The Black Ships. A Novel of World War II.” Getting great reviews. Click on the link at the top right of this page and check it out….thanks.

Love this from the UK:

‘I’m not having children because I want to save the planet’
What’s the best thing you can do to help save the environment? For Anna, a cycling instructor and writer living in Bath, it’s to have fewer children. She has chosen not to have any at all.

First of all why does somebody need to pay someone to teach them how to ride a bicycle. Isn’t that what dads are for? Oops sorry for the white privilege.

Secondly, I say great, the world doesn’t need more offspring from some idiot that could potentially taint the gene pool. After all that is why we have the Darwin Awards.

She / they say that the world’s population is exploding therefore people should be having less or no children. Well this plays right into Islam’s ideology. “If we can’t overrun you by the sword we will destroy you demographically.” Islam poker match:

LA is treating its streets with some sort of “white coloured film-over” to combat climate change. Hey isn’t this a white privilege initiative? Black Lives Matter were all in a tit-shit over this latest move by the LA city council.

Speaking of so called whiteness and idiocy / stupidity. Some journalist from Macleans / Globe and Mail reported on the Humboldt Tragedy  “Go Fund Me” initiative (SDA):

I’m trying to not get cynical about what is a totally devastating tragedy but the maleness, the youthfulness and the whiteness of the victims are, of course, playing a significant role here.

Unbelievable! Would she say the same thing if they were black, or Asian? So racist, so utterly callous, so utterly bullshit. She should be fired for her callousness but she won’t. That only happens to white males here in Canada!

On the “how do these idiots ever get elected” file comes this. Again from London:

“Led by London Mayor and notably weak-kneed coward Sadiq Khan the British nation has now decided to fight back against knife violence… by a new campaign that should be called: Ban the blade. It could be called: Forever chopsticks. In truth, it’s called: knife control.”

Now, Benson continues, you are going to have to show an ID card before you purchase a carving knife. But, it’s not just carving knives. The new rules are also going to restrict the sales of plastic knives. But, the enquiring mind wants to know, what about forks? And, what about pitchforks? And what about Fork-lifts?

British Parliament is also set to take up heavy “knife control” legislation when it resumes this week. The U.K. government is expected to introduce a ban on online knife sales and home knife deliveries, declare it “illegal to possess zombie knives and knuckledusters in private”

Zombie knives? Are you kidding me. Don’t they know that zombies: 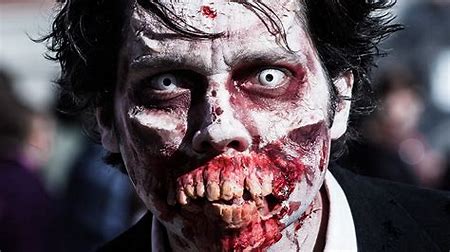 ARE ALREADY DEAD!  A knife can’t hurt them! I can’t make this stuff up. Someone added: “how are we going to eat our food now? Especially lobsters.

“Fingers just don’t cut it” someone else remarked.

Not a knife to be seen. Or box cutters.

“No we use our knives and box cutters for more important things.”

Why most of Meghan Markle’s family will not be at the royal wedding:

While Prince Harry’s family will turn out in force for his May 19 wedding to Meghan Markle, the same can’t be said for the bride’s family.  That’s because the Markle family is a tangle of half-siblings, multiple divorced spouses and their children. The dysfunction, feuds and recriminations in this middle-class American family with more than its share of good and bad fortune are such that it’s hard to keep her family tree straight.

Hmmm, must be the direct descendants of Henry the VIIIth!

From Journalistate comes this bit of fluff: Angelina’s daughter used to be gorgeous. Now she looks insane!

Things you would never hear 20 years ago:

“Sometimes becoming a parent feels out of my reach. My wife and I both have uteruses, and sperm costs too damn much.”

You got that right Virginia, Virginia. About $250K according to today’s parent. Poor kids! No father. Damn that SJW, white privilege rhetoric again!

Quote of the year!: “Aborting babies is my Christian calling”…say what?

He says he is “quite comfortable talking about the moral and spiritual center.” He calls it “dignity restoration.” It’s okay to sin, so long as you convince yourself to feel good about it.
As long as it feels good it’s okay. Psychopaths are in a tizzy over this one!
I mean that’s why the Catholic Church invented Confession isn’t it? Just go in to the Priest Cave once a week to seek atonement and absolution, and voila, the slates clean so you can now go out and sin again, and again, and again. So very, very righteous. These guys were geniuses. Like you car, your soul needs a tune-up and a wash (with wax) every once in awhile.
And, and, the Pope now says that hell doesn’t exist and by its own corollary, Satan, or the devil him / her, zir, zey, zits, titz… self can’t exist without his own dominion to look out over.
It was getting too hot in the kitchen I guess…….Geeesh
The world is getting crazier and crazier. I love it as it keeps my blog relevant.
Have a Happy Friday and weekend. Read ya Monday.