English researchers say that the colonization of North America by European settlers in the 1600’s caused climate change and the little ice age. They state that these settlers were instrumental in indigenous extinction by the slaughter of over 56 million native Americans over a period of 100 years. They also state that by killing these native peoples that their farmlands were placed in dormancy and fallowed which eliminated or decreased C02 levels.

This is just more “Fake News” to expand the human induced climate change narrative. Why?

They take no account of the major Icelandic volcanic eruptions in this time frame that virtually covered all of Europe and parts beyond with a blanket of dust, which in turn decreased sunlight reaching the earth.

Don’t believe everything you read. Research these false claims. Shame on the “Hill” for covering this journalistic shyte:

“With regards to the population of Aboriginal people in what would become Canada at the beginning of sustained European contact in the early 16th century, estimates vary. Anthropologists and historians have, however, given a tentative range of between 350,000 and 500,000 people, with some estimates as high as two million. – 7 million in the US. There was a major population decline before the arrival of Columbus in 1492. Farming practices were nomadic in nature and based solely on subsistence, nothing more. It was the federal governments of both Canada and the US that introduced sedentary farming practices for First Nations in the later part of the 19th century.”

The  retirement age in Canada is too low and that is going to be a major problem (Maclean’s). Harper knew that and changed the retirement age to 67 from 65 –  a move that was implemented by many western nations. So blame Trudeau for this Canada, not Harper, as it was Trudeau who changed things back to 65 solely for election purposes, nothing more and definitely not for the health of Canada’s pension plans.

“Wiarton Willie” predicts an early spring. This famous Canadian groundhog weather predicting icon has only been correct 37% of the time over the years – low but much better than our professional overpaid weather witches who have been wrong 90% of the time! 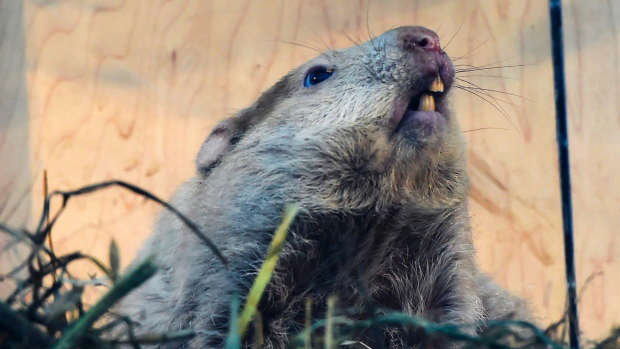 Got any carrots, or Romaine lettuce?

Did you know that: