Home schooling is looking better all the time. This from the NY City School Board 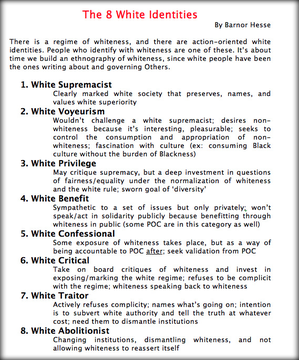 But.. but…but…isn’t white a colour? If so am I not a person of colour…like a black man, or a yellow man, or a red man, brown man. I am, therefore I am… a white man.

It is a crazy world out there.

From the world of profoundness comes this:

It’s only ‘the end of the beginning.’ COVID-19 will be with us for years

Trudeau finally gets smart. Covid 19 vaccines? “Oh It’s a provincial problem, not a federal one. After all the health of Canadians rests with our provinces, not me. This is highly classified you know. Call for a cone of silence.” Trudeau states. Wonder where he got that from

Like I have been saying for years. Canada has a dumb electorate:

Extraordinarily accurate analysis from a foreign country. God help Canada . Some people have the vocabulary to sum up things in a way that you can quickly understand them. This quote came from the Czech Republic. Someone over there has it figured out. It was translated into English from an article in a Prague newspaper.

This article, translated from a Prague newspaper, hits the nail on the head but unfortunately paints those of us that did no vote for the “Prince of Fools” with the same brush….

“The danger to Canada is not Justin Trudeau, but a citizenry capable of entrusting a man like him with being Prime Minister. It will be far easier to limit and undo the follies of a Trudeau government than to restore the necessary common sense and good judgment to a depraved electorate willing to have such a man for their prime minister. The problem is much deeper and far more serious than Trudeau, who is a mere symptom of what ails Canada. Blaming the prince of the fools should not blind anyone to the vast confederacy of fools that made him their prince. The country can survive a Trudeau, who is, after all, merely a fool. It is less likely to survive a multitude of fools, such as those who made him their Prime minister.”

And, unfortunately, we have another tool waiting in the wings.

Recent poll is Canada. Do you believe in Trudeau’s new gun law legislation? Yes or No?

“No matter, because it is going through. After all, it is 2021 you know and I am the Prime Minister of Canada and………YOU’RE NOT.”