Watching 6 hours of the Tour de Farce equates to watching a barn door for 6 hours. And with this, like watching CNN,s coverage of Trump, you can also watch paint dry and grass grow. Just as exciting.

I researched this so you don,t have to.

And after this, European wide world of sports brings you the final match of the intenational darts competition.

This time tomorrow I will be on my way to France, Vezelay.

Just hope the French do not read this post.

Just read an article over here that suicide rates are increasing due to climate change. “ The heat is on” said one dude here.

Or suicide rates are on the rise due to Trump dyrangement syndrome.

Is that like in bridge,I thought to myself when reading this article in the Dutch magazine. As in clubs are Trump, as in playing too much bridge is causing a correllation between clubs are trump and Donald Trump?

No, climate change and Donald Trump are not causing suicide rates to climb. No, no, no.

Watching the Tour de Farce, er France, for hours on end without anything happening will definitely cause one to slit their wrists.

If the French read this post I will definitely be trumped with clubs.

I watched the Tour de France today on TV. Now there is an exciting spectator sport if I ever saw one. Like cross country skiing! And what does one call a large group of cyclists anyway? A turd? I mean a group of whales is called a pod, seagulls a flock. So what do we call a group of cyclists? Probably a herd. Okay, watching this herd of cyclists covering about 200 km was as exciting as watching paint dry.

”Paint dry? What is dat? “ My Dutch colleague asked.

“Well, you know, like watching grass grow.” I answered as diplomatically as possible.

”I don,t undertstand dis, paint dry or grass grow.” He looked at me with ascanze – a dumb sort of look on his face.

“Okay I,ll be as diplomatic as I can be.” I replied.

“Sucre blue” he exclaimed in his best Dutch.

“ You mean Sacre Bleu?” I corrected him.

So after 2 hours of watching a turd, I mean herd, of cyclists ride by the announcer comes on to inform us all – with bated breath – that there are only 150 km to go.

“Getting close” I thought to myself – ooooooooo

And what did the man on the street have to say after camping out for over a week on this stretch of a French country road to watch this herd ride by.

”So what do you think?” The French reporter asked.

“Well I have been out here for a week just to see this race!” The spectator exclaimed. And just as he was telling the reporter what he felt the terd, I mean herd, rode by in a flash.

“I missed the herd. I have been here all week.” Damn…..Sacre Blue.”

” You mean Sucre Blewd.” The Dutchman corrected him.

What this really boils down to is that like spectators all over the world they are really hoping and praying that this herd of terds will wipe-out.

Vezelay is coming soon. First to the Netherlands though to see family and friends:

Second Day: 8 goals scored among 6 teams for over 280 minutes of play. Things are going south;

Third Day: 8 goals scored among 8 teams for over 370 minutes of play. But Croatia and France account for 4 of those goals. Things are getting really exciting now;

Fourth Day: 4 goals scored among 6 teams. Some upsets though. 3 matches for over 270 minutes of play but only 4 goals. Wow:

So for over 5 days we have 32 goals scored among 28 teams. Just over 1 goal per team per 14 matches. Exciting stuff. Won’t lose any sleep over this one.

See, even this guy is excited. I told ya that more action is in the stands than on the pitch: 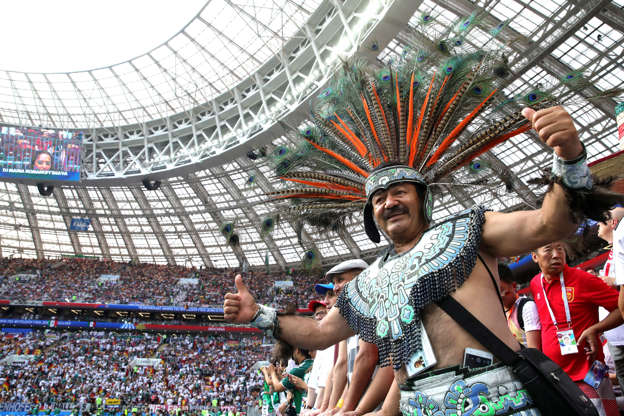 Shocked I tells ya, shocked. This gal just returned from the World Cup in a state of shock over all of the excitement. You can see it I’m her face:

Take a good look at her sign. “I had to get home right away to protest?”

“What are you protesting,” a CNN reporter asked:

Her response: “You talking to me? Yeah you. Are you talkin to me?”

The look on her face says it all!

Clashes in Kashmir after EID prayers. Their team failed to qualify for the World Cup! All hell broke loose. Hey can you say that?  Hell I mean.

FIFA states that Israel must compete in Europe not Middle East for World Cup qualifying, which is code for saying: “we don’t want you here.”

Meanwhile over in the Middle East, where many a World Cup participant hails from, comes these headlines:

Priest stabbed by Palestinians in Bethlehem. It would appear that the priest was rooting for the Saudis, a team that got butchered by the Russians, 5 to zip yer head off.

Another Saudi supporter, this time a woman, uses box cutters to stab two French people in France. She was yelling Allah Akbar while doing this nasty bit of business. When interrogated afterwards she told police that she was upset that France won their first match in the World Cup and her fav team, the Saudis, lost 5 to zip off their Russian heads.

Israel foils Hamas plot to bomb Jerusalem and Tel Aviv. This over the Saudis recent loss to the Russians at the World Cup. The Saudis lost 5 to zip off their Jewish Russian heads, don’t you know….wow.

Why is it that when a Canadian Caucasian family starts a fire while camping it can be construed as a potential fire hazard and could cause this?:

Yet when a First Nations family starts a fire while camping it is construed as a “Sacred Fire”. Perhaps, but it could still do this:

“Yes, but it is still a sacred fire. To expunge the dark spirits of the land and bring new life, new birth.” Okay……………..Geesh.

“After all we, first nations people are nature’s caretakers. We harbour a great love for nature:”

Song of the day…A Classic!

Vezelay is coming up for me. Can’t wait to start this pilgrimage walk.

Check out Kurofune. Click on the link at the top right side of the home page. Getting great reviews.

Not much to say today. Going out for a very long walk in preparation for the Vezelay pilgrimage.

Trumps in Korea exchanging pleasantries. Trudeau is at home sulking with his thumb in his mouth. Macron, Merkel et all trounced back to their home countries all in a tizzy over Trump’s actions. Great stuff!

World cup starts on the 14th of June. Another month of vibrant exciting football…not. 90 minutes of sheer boredom with an added 2-4 minutes of more sheer boredom. I am always amazed at such low scores or no scores. With a goal net that big? Are you kidding me.

Are you kidding me?

How could one miss? As opposed to this:

Boring. I sure as hell will not be watching. Unless of course all hell breaks loose. Then it is exciting to watch:

Most of the action…no all of it, is in the stands. In this particular game all hell broke out because it was a tie game!  0-0 for the home team!!! Imagine the chaos if some team had won?

Hard to believe Italy and the Netherlands did not qualify. Their reaction?

We’re all losers baby if you think this is exciting.