Here’s looking at you kid…Rob the Lobster!

The short piece about the lobsters in yesterdays post got me to remembering something that happened to my wife and I years ago.

I was stationed in Halifax NS. First time living in the Maritimes. My wife and I bought a house out in the Dartmouth burbs. One day she said to me. “Why don’t we have lobster tonight for dinner? I mean we have never had that before and it’s supposed to be a real delicacy down here.”

So down I go to the local fisherman’s wharf after work and buy a couple of lobsters.

“They’re  canners the guy told me. Not as expensive as the real normal thingys, a bit smaller, but just as tasty.” I paid him and left. “Of course they are still alive,” he added “so be careful of the pincers.”

I got home and was proud of my catch. Changed, waited until about 6pm then went into the kitchen.

“So, are ya goin to cook these two babies?” I said to me wife. “Me?” she said looking at me quizzically. “I don’t know how to cook lobsters. I thought you were going to cook them.”

I looked at her dumbfounded and with a dumb look on my face. I was gobsmacked! Of course this was back in the day before the Internet so I couldn’t check on line to see what gobsmacked meant!

“Can’t be difficult.” I thought. So I took out a large pot. Got the lobsters and smeared them both with butter avoiding their pincers at all cost. They were still alive, withering and moving in slow motion as if they knew their fate. I turned on the oven and preheated it up to 450. Once that occurred I threw the lobsters into the pot and placed the pot into the oven. Done, now sit back relax have a few beers and wait.

All of a sudden all hell broke loose. The kitchen lit up in a cacophony of noise: click-ity clack, click-ity clack, clack, clack. Click, click, click, clack clack clack. “What the hell was going on.”I thought. I turned the oven light on and took a look. “Good gawd almighty.” I screamed. The two lobsters climbed out of the pot and were scurrying to and from all over the oven. Jesus, what now. What do I do now? I called my buddy and told him what was happening. He started to laugh.

“No, no, you idiot. You can’t bake lobsters. Too cruel to place them in the oven and slowly kill them” “So, what do I do then?” I asked of him. “You have to boil them alive. Its a better, quicker fate for them… Get a large pot of water then boil it to a running boil then throw the lobsters in and when their shells turn a bright red, they’re done.” “Oh, really” I thought, “okay.” But why don’t I just smash their heads in then throw them in.” “No, no, no. He said “You have to cook them alive otherwise a toxin is released that could make you really, really sick.”

I turned off the oven, got the largest pot I could find, filled it with water then waited until I had a running boil.  How do I get the lobsters out of the oven. They are surely going to be pissed off with me no doubt. Better avoid those pincers at all cost.

They were pissed. I could tell they were in such a state of click-ity clack panic. They slithered quickly out of the oven and fell onto the floor. Pissed off with me no doubt. The wife and I ran around the kitchen floor trying to nail these guys but to no avail. It was comical but not at the time. I don’t know who was scareder. The lobsters or us. Finally we cornered them in the corner of the kitchen and somehow got them up and into that pot. It took a while but we managed to capture them. Holding them I could sense their evil eye or feelers or antennae or whatever their tiny brain cells were that they were not all too happy about their fate or about me!

Into the pot they went and sure enough, after a short while their outer shells turned red. For good measure I left them in there for a few more minutes until I knew for certain that their lobster souls had gone to lobster heaven.

Okay, there they were. On our plates. But looking down at them it seemed to me that they were both looking back up at me and laughing. “Yeah,” I thought I heard them say: “you are an idiot. You may have won this battle but you have lost the war. Try eating us now idiot with your tools. It ain’t easy. And be careful of the green mush of our bodies. It’s disgusting.” Trying to get at their legs, tails and pincers with a knife and fork was a real challenge. I got frustrated for I knew I had lost this culinary war. I threw them out and made myself a couple of peanut butter sangys. It wasn’t until later that someone told me you have to eat them with a nut cracker in hand. “Who’s nuts are we going to crack.” I asked sheepishly. You know, when I threw them two canners out into the trash I thought I heard some cackling noises – directed my way. No,no,no, give your head a shake shakey.

I see the UK is establishing a new government Ministry to address loneliness. The Ministry will be right beside the now well established and well respected, infamous Ministry of Silly Walks: 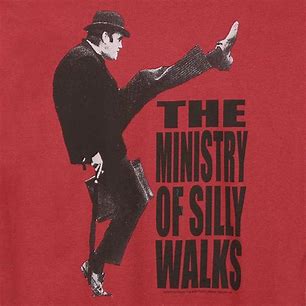 Another one bites the dust. Patrick Brown, leader of Ontario’s Conservative Party steps down and resigns amid allegations of sexual impropriety.

“We’ll have to get a new head,” a senior party official was want to say.

“Er sir, best to use the word leader instead of head.” another senior advisor proffered (How I love that word proffered – learned it at University)

“Well yes,” he went on. “We’ll have to learn to lead with our hearts instead of our heads,” he continued. Ehhhhh? PCs are doomed. 4 more years of Wynne. PCs? The party that keeps on giving.

Geesh….we’re doomed. I am deeply concerned as I once admired a woman 25 years ago! Yikes.

Gawd, Canada’s Free Press had a scathing piece about Trudeau’s very limited brain cells. That should guarantee him a vast majority in 2019. After all the Quebec and Ontario electorate, from the two province’s that really run Canada, is so bereft of brain cells that they all but guarantee a massive majority. “But he has nice socks, and don’t forget about the hair!” One of the voting public remarked.

In deference to the UK brain trust the following tune is proffered:

Don’t worry, be happy and stop watching network news. I know I have for sometime now.

Hopefully then you will have a happy news year.

Still suffering from tendinitis. Improving somewhat so I have to limit my mousing.

I am going to start posting excerpts from my book: I Thought I’d Died and Gone to Heaven.