But, divershity is our strength don’t ya know and soon to be coming to Toronto and other major shities in Canada.

Then again, here in Canada, we have an app for that to take care of all of those football related ankle injuries:

I’m a twenty first century man but I don’t wanna be here:

The BBC’s diversity chief has claimed black actor Idris Elba’s TV detective Luther ‘isn’t black enough to be real’ because ‘he doesn’t have any black friends and doesn’t eat any Caribbean food’.

Pirates of the Caribbean, here I come.

Arctic sea ice grew 27 percent last year, the Canadian Department of Environment reported yesterday. The only problem is that the figures contradicted claims by then-Canadian Environment Minister Catherine McKenna that the Arctic “is literally melting”

Yet, to coach Little League Baseball or minor hockey for my two sons I have to have a criminal background check and a character reference examination.

Well I did promise transparency in our Government Trudeau said.

At least he is from Quebec.

Geesh, only in Canada.

Even the UK and the EU have noticed how badly Canada has been run:
With respect to Canada, this from a UK Politician:‘ It would sound to me, like with the EU, there’s a lot of fake news in what he is saying. He (Trudeau) should butt out of UK affairs and concentrate on running his own country, which he doesn’t seem to be doing very well.’

Click on the links above to learn more about these books.

A leaked Feb. 1 memo from Laurentian University president Robert Haché said it took the step of the CCAA filing because “despite Laurentian’s best efforts, the university has not been able to achieve the type of cost-cutting and restructuring measures to position it for future success outside of this type of formal proceeding.

Laurentian offers 28 gender studies courses, so maybe that will pull them out of the financial fire. Or that other job worthy degree in anthropology – or philosophy…eh Ted?

Give me a break!

A veteran comedy troupe out of Toronto tried the virtue signaling route following the rise of Black Lives Matter.

When that failed to solve racism in the Great White North, The Sketchersons took extreme measures. The long-running Canadian group canceled itself before the woke mob could do it for them.

The Toronto-based group shared the grim news on social media late last month. The post revealed why its initial embrace of BLM proved insufficient, and how it forced them to crunch the numbers on its diverse lineup.

Or lack of a diverse lineup, as they saw it.

Readers unmoved by wokeness may be inclined to point out that a way to overcome “alienation” – here, it seems, a euphemism for ignorance – is via students learning things, perhaps even words.

These woke guys and gals would love the Navy – acronym city. I know I once wrote a sentence with about eight acronyms in it. Maritime jargon. The scary thing about that was that all of my mates understood exactly what I was saying with those words…yikes.

Interesting that this guy retired just a few months before this story of alleged misbehavior with female subordinates came out…yeah right.

I don’t trust any male whose name is Vance…or Lance…or Myles for that matter:

It comes after exclusive reporting by Global News into allegations that Vance engaged in inappropriate behaviour with two female subordinates, including an alleged intimate relationship with a subordinate while he was in the top post.

Typical Liberal speak remarks by the Minister of National Defence, after this story broke? “I am concerned.” I can tell you  that this guy knew about this months ago, hence the retirement announcement a few months back.

Wonder what her name is. Gladys perhaps?

An LGBT activist has called for ALL children to be put on puberty blockers until a decision is made as to what gender they are going to be.

Zachary Antolak began as a gay man but now identifies as a lesbian woman named Zinnia Jones and is in a polyamorous relationship with another lesbian named Heather and a ‘trans woman’ named Penny.

What better example of obvious mental stability to decide which chemicals to bombard your children with?

But, in Nice Canada, we go one better:

The Standards Council of Canada (SCC) is seeking a consultant to officially standardize the definition of words on the topic of gender and diversity.

A Request for Proposal (RFP) was posted by the SCC earlier this week in support of the Government of Canada’s 50 – 30 Challenge, which strives to “increase corporate diversity” by increasing “representation” on the boards of Canadian organizations:

The 50 – 30 Challenge asks that organizations aspire to two goals:

Before gender parity and diversity goals can be achieved, “key terms” must be standardized and officially defined.

Code for Whitey need not apply. Can’t they see the discrimination inherent in this policy?

Sign me up as I am a lesbian trapped in a man’s body. I need help I tells ya.

Oh yeah, and send me money.

Canada’s Federal minister in charge of student volunteer grant program can’t say how much of $30 million paid to WE has been reimbursed.

Oh, I don’t know…probably none of it. But hey, it’s only money right?

“We can share that … $30 million has been released to the organization through the contribution agreement. I was not aware of how much money has been returned,” Bardish Chagger, Minister of Diversity, Inclusion and Youth, said Tuesday to House of Commons ethics committee members.

Minister of Diversity, Inclusion and Youth?? Are you kidding me? How does one administer diversity, administer inclusion, youth? When asked Bardish just shrugged. “Ask we.”

Have you noticed that Canada is slowly but surely becoming a third world country with corruption, nepotism, discriminate policies and political favoritism to garner votes? We opened this country to third world immigrants. We want to become diverse because diversity is our strength – or so we have been told. Does being diverse come with a cost to our freedoms, values and ethics? Will our attempt with more diversity, adversity (sic) undermine our political institutions as we adopt third world constructs so as not to offend any one particular group? Will these diverse groups assimilate into our Canadian way of life and adopt our core values or bring their own third world way of life and attitudes with them?

So says the woman (?) at the bottom right in the photo who identifies as being black. 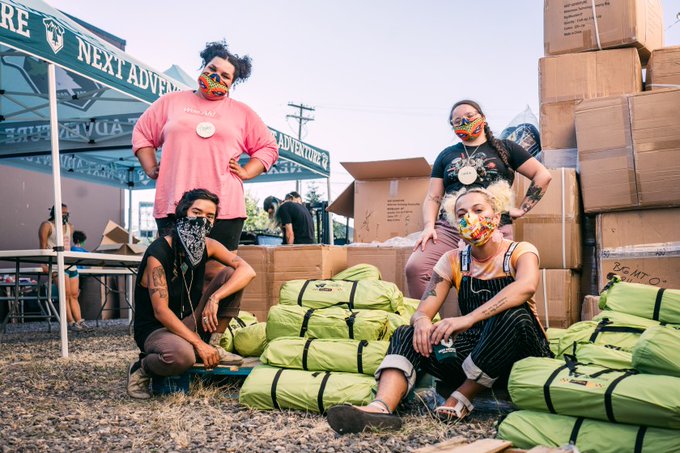 To mask or not to mask? That is the question:

I prefer this mask:

Check it out. Link is at top of the page.